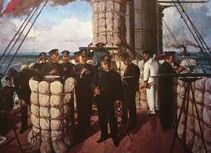 
「上記史料のルーズベルトによる英訳」
"The war of twenty months' duration is now a thing of the past, and our United Squadron, having completed its function, is to be herewith dispersed. But our duties as naval men are not at all lightened for that reason. To preserve in perpetuity the fruits of this war; to promote to an ever greater height of prosperity the fortunes of the country, the navy, which, irrespective of peace or war, has to stand between the Empire and shock from abroad, must always maintain its strength at sea and must be prepared to meet emergency.
This strength does not consist solely in ships and armament; it consist also in immaterial ability to utilize such agents. When we understand that one gun which scores a hundred per cent. of hits is a match for a hundred of the enemy's guns each of which scores only one per cent. it becomes evident that we sailors must have recourse before everything to the strength which is over and above externals. The triumphs recently won by our Navy are largely to be attributed to the habitual training which enable us to garner the fruits of the fighting.
If then we infer the future from the past, we recognize that though war may ceases we can not abandon ourselves to ease and rest. A soldier's whole life is one continuous and unseasing battle, and there is no reason why his responsibilities should vary with the state of the times. In days of crisis he has to display his strength; in days of peace to accumulate it, thus perpetually and uniquely discharging his duties to the full. It was no light task that during the past year and a half we fought with wind and waves, encountered heat and cold, and kept the sea while frequently engaging a stubborn enemy in a death or life struggle; yet, when we reflect, this is seen to have been only one in a long series of general maneuvers, wherein we had the happiness to make some discoveries; happiness which throws into comparative insignificance the hardships of war.
If men calling themselves sailors grasp at the pleasure of peace, they will learn the lesson that however fine in appearance their engines of war, these, like a house built on the sand, will fall at the first approach of the storm. From the day when in ancient times we conquered Korea, that country remained for over 400 years under our control, to be lost immediately as soon as our navy declined. Again when under the sway of the Tokugawa in modern days our armaments were neglected, the coming of a few American ships threw us into distress, and we were unable to offer any resistance to attempts against the Kuriles and Saghalien.
On the other hand, if we turn to the annals of the Occident, we see that at the beginning of the 19th century the British Navy which won the battles of the Nile and of Trafalgar, not only made England as secure as a great mountain but also by thenceforth carefully maintaining its strength and keeping it on a level with the world's progress, has throughout the long interval between that era and the present day safe-guarded the country's interests and promoted its fortunes.
For such lessons, whether ancient or modern, Occidental or Oriental, though to some extent they are the outcome of political happenings, must be regarded as in the main the natural result of whether the soldier remembers war in the day of peace. We naval men who have survived the war must take these examples deeply to heart, and adding to the training which we have already received our actual experiences in the war, must plan future developments and seek not to fall behind the progress of the time.
If, keeping the instructions of our Sovereign ever graven on our hearts, we serve earnestly and diligently, and putting forth our full strength, await what the hour may bring forth, we shall then have discharged our great duty of perpetually guarding our country. Heaven gives the crown of victory to those only who by habitual preparation win without fighting, and at the same time forthwith deprives of that crown those who, content with one success, give themselves up to the ease of peace. The ancients well said:
"Tighten your helmet strings in the hour of victory."
(Dated) 21st December, 1905.
TOGO HEIHACHIRO.
I commend the above address to every man who is or may be a part of the fighting force of the United States, and to every man who believes that, if ever, unhappily war should come, it should be so conducted as to reflect credit upon the American nation.
「余は以上の訓示を合衆国の軍隊の一員たる者ならびに、もし万一不幸にして戦いが生じた時、祖国の名誉を護るために身を捧げんとする人たちに推薦する。」
THEODORE ROOSEVELT.
CHARIES J. BONAPARTE,
Secretary.
（セオドア・ルーズベルト大統領「書簡」より）